I got to see my “old” samba troupe perform in Seattle a few weeks ago.

They were still jamming and sounding pretty good on that Brazilian beat. Memories of my formative best-time-ever moments came flooding back. Dancing with Vamola is one of the most satisfying things I have ever done. We samba-ed our butts off for the Seattle Folk life festival, Seattle Pride parade, Bumbershoot and a bunch of other things in the earlier part of the 2000 decade. Memories that include:  our talented director Tom Armstrong (what ever happened to Quasi-Nada?), Kate our dance leader, dating a fellow Vamola-er, making a costume of red–one of which I have never been able to throw away. I am still carrying the feathers around. What do I do with them? I can’t throw them away.

We saw them at Brazil fest held at the Seattle Center which was sleepy compared to any Latino gathering in the Bay Area but we had a view of the Space Needle and it was still fun.

It is timely and has come full circle–as I hope to make it to Brazil this year after 23 years of loving Brazilian music and dance. Will I be able to keep up samba wise? I doubt it. I better start practicing. 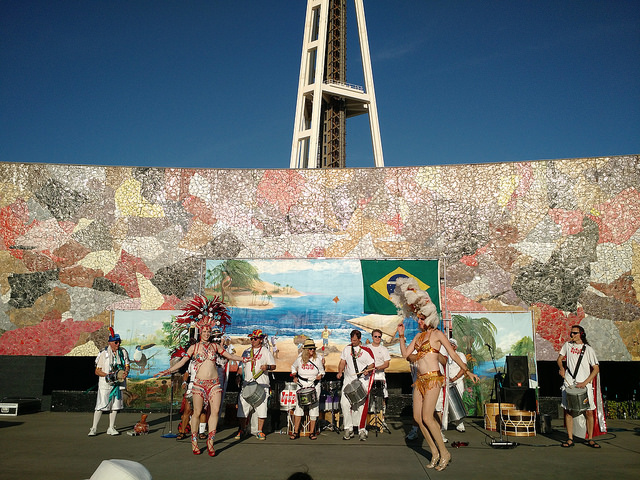 6 thoughts on “Vamola: Seattle Center After All These Years”