No festival or concert in the United States prepared me for the crowds of Carnival in Salvador, Brazil. It was beyond what I could have imagined but that made it even more amazing. I read on the Lonely Planet and Thorn Tree forums about Carnival in Salvador but it was much crazier then they had described.

Does this mean you should not go to Carnival in Salvador? No, absolutely not. Especially if you love Brazilian culture and music.

Salvador is a coastal city in the state of Bahia in northern Brazil. It has the largest concentration of Afro-Brazilians in all of Brazil allowing for a preservation of African customs and religion. It has led to a richness of musical styles such as Samba Reggae and the spiritual Afoxé.

Carnival in Salvador begins on the Thursday before Ash Wednesday and continues through Tuesday night, technically. Although the people across the street from my Airbnb were still partying on Ash Wednesday. They were still drinking beer (carnival is already 6 days of heavy beer drinking) and still playing music very loud. 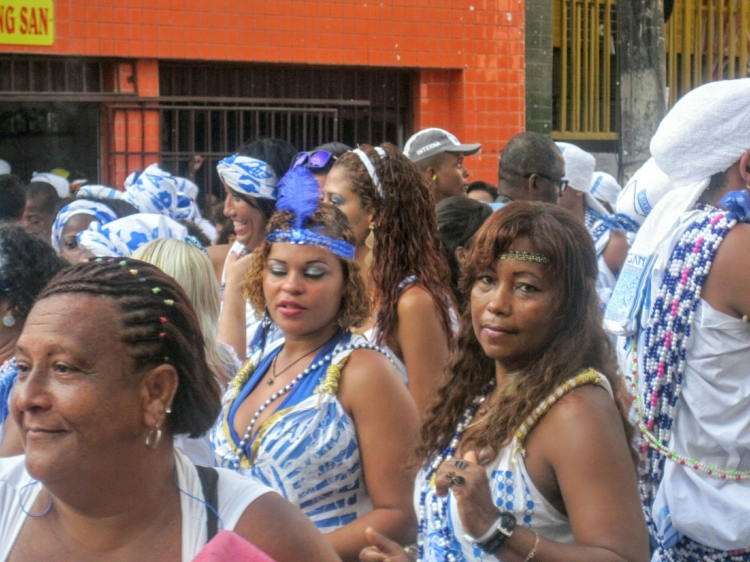 On Thursday the stores will board up and banks will close. I was lucky I didn’t need to buy anything and had an opportunity to go to far away from where the parades were to withdraw cash because ATMs were closed along parade routes.

The main events are parades that transverse through the city in 3 main areas. Some are during the day but the party really gets going at night and it also becomes unreasonably packed. The parades consist of tractor trailers carrying top musical acts on massive stages called Trio Electricos. Carnival in Brazil is defined but this event–different then in Rio at the Sambadromo where floats are more like a theatrical production.

Carnival goers follow behind the Trio Electricos and you can buy an Abada or be “Pipoca or Popcorn” as you bounce around in the street. With the Abada you get a T-shirt and are in a roped area behind the truck and can get a bit pricey.

There are so many people in the street that when some of the Trio Electricos come by it becomes impossible to pass or even move. Each group has hundreds if not thousands of people following it. People follow kind of walking and kind of dancing, kind of pushing–especially if the group is popular. Then the Police come through dressed in riot gear and push the crowd over as they pass. You could be knocked over. Some people are nice but others just want to keep their place in line and the vibe can get intense. Fights break out in the pushing and the moment is ripe for pickpocketing.

There was time when a well-known hip hop artist in Brazil came by and I stayed against the wall, holding to a pipe and almost jumped up on a concrete out cropping to avoid being pushed. My Airbnb host and I joked I survived a Carnival hurricane.

But here is the thing not every group is like this–it is more the case of popular acts and more true at night. If you follow an Afoxé group such as Ilê Aye, I think is less likely that you will have this experience. My host warned us to be careful especially with Olodum and Bell Marques, that is where the fights break out.

It is tempting to follow the Trio Electrico because that is where the music is. But you can choose a safe place, a wide street to watch from where there is more space and you are less likely to be pushed. It also free. But it also can get a little dull as you wait sometimes what can seem like hours for the next musical act to come by. One Saturday night I found ample space on the Barra route by the ocean and was safe all evening long alone, watching the music.

If you buy an Abada you are inside the ropes of the truck and in theory are safer. I didn’t do it but people I met said they didn’t feel particularly more safe inside the Abada. That there still was pushing. But you do get a T-shirt and get to follow your favorite group all night long. Some acts have two trailers–one is the group and the other is the support trailer that dispenses water and has a bathroom so you never have to leave the Abada. Prices run from about $30 US to $300 US.

There are two more options to enjoy Carnival in Salvador.

One is to buy a ticket to a Camarote which is like a grandstand or 2nd floor bar open to the street which often includes a full bar and buffet. You are safe from the confines of the bar and you can get to see the float from high above but that seems more for partying them for being up close with the music.

The second is to hang out in the Pelourinho, the historical center of Salvador. There you will find a much more chill vibe–almost family like with stages set up around the neighborhood, restaurants to sit outside and small drum and dance groups casually parading on foot around the streets. Much, much fewer people, less beer and the groups parading felt like young artists doing their thing. It also is more traditional and less modern.

Where you stay for Carnival is Salvador will be strategic since it is difficult to go from one section of town to another during the parades. Barra by the sea tends to be where the out of towners are. The streets by the ocean felt more spacious than in some of the other neighborhoods but it is quite far from the Pelourinho. I stayed in a home in Dois de Julho, a neighborhood in between which perhaps could be considered a little rough but was not touristy and close to some of the parade routes. You can take Taxis but getting through can be impossible. I took a moto taxi and it was scary but pretty awesome! I also walked at night from the Pelerinho to Dois de Julho around midnight which we were warned not to do but I was careful to walk with my full guns blazing–my eyes. 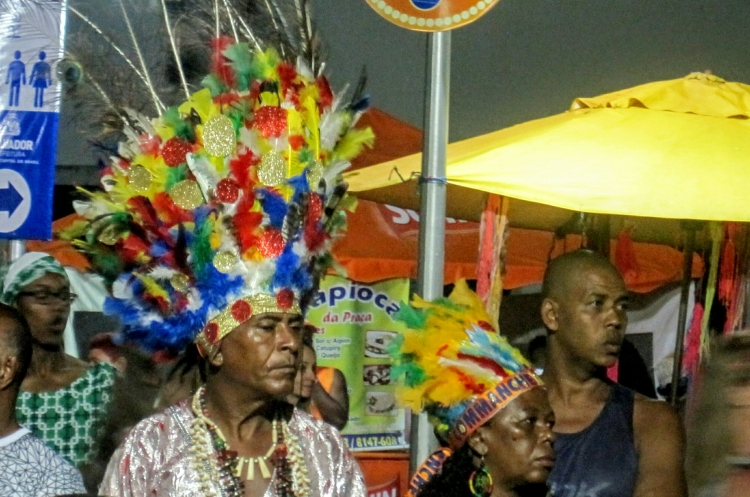 Wear sneakers, only take what money need for the night and keep it tucked inside your clothes. I love this Lewis and Clark wallet. Actually I need to thank Liza at Carnival for introducing me to this kind of travel wallet! The same goes for your camera. Find away to keep it hidden and not easy to grab. Also book your lodging it least a few weeks ahead of time. YouTube videos  are great way to get an idea how big the crowds get.

There is more than one way to experience Carnival in Salvador. 🙂

For more about my journey to Salvador read: Brazilian Music and Dance Coming Full Circle.

One thought on “Carnival in Salvador, Bahia Brazil”